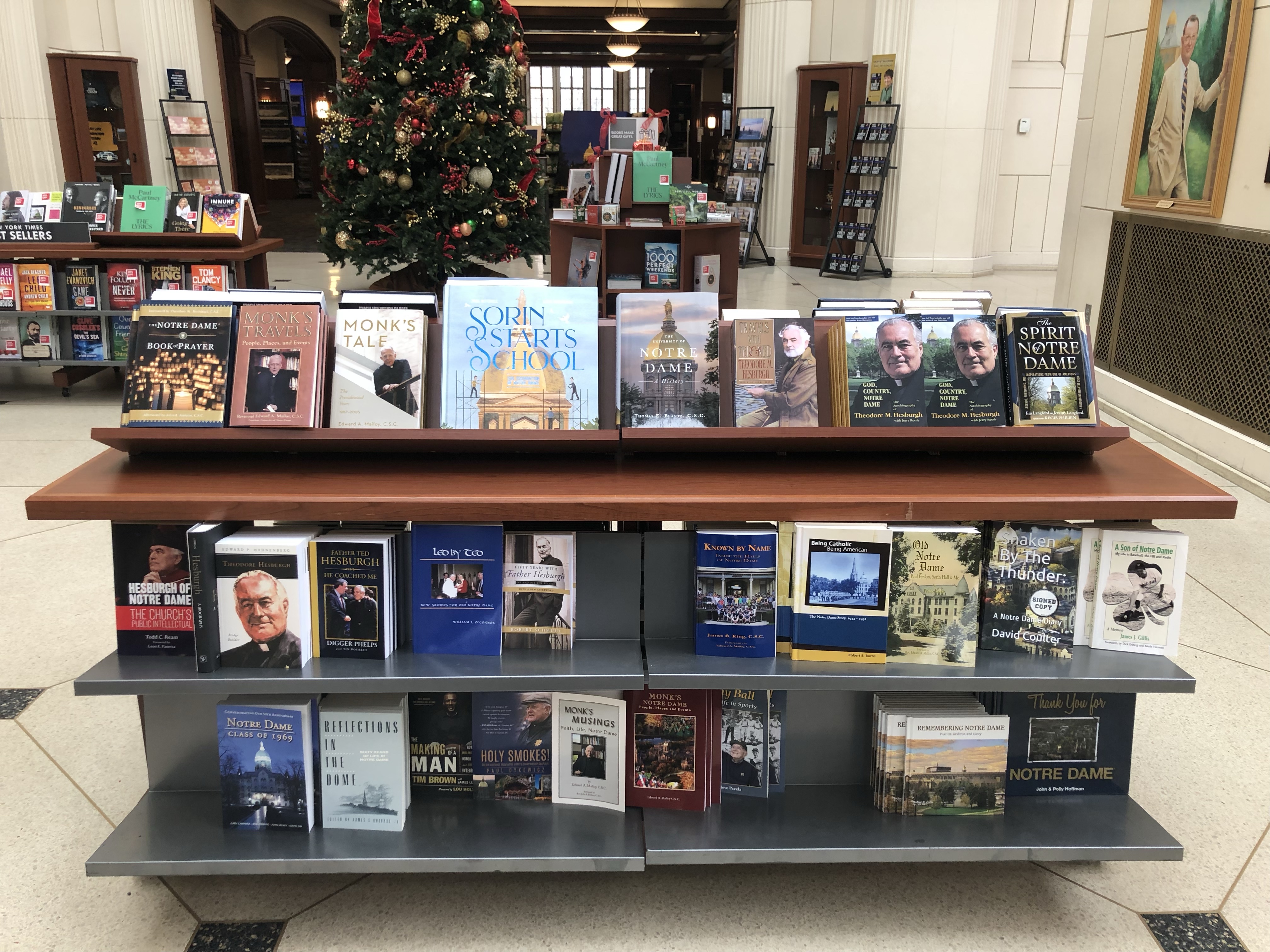 If you enter the Notre Dame bookstore this Christmas, what book will you find there? None other than Sorin Starts a School: The Foundation of Notre Dame! This favorite children’s book about Notre Dame is delighted to be in the same company as Ted Hesburgh, Monk Malloy and other fine authors from Our Lady’s University.

Even before Sorin Starts a School arrived in bookstores, the Notre Dame bookstore expressed exuberant interest in the book. Now, for Christmas, students and families can find the beautiful hardcover at the entrance of the bookstore.

In 2021, the Notre Dame family reacted with excitement. The book was shared through Notre Dame alumni clubs all over the country. They reported that both adults and kids love the book!

The NDAA welcomed the book’s author, Paul Mitchell, and illustrator, Katie Broussard, on their Everyday Holiness podcast in November 2021. On the episode, Katie and Paul describe the creation of the beloved children’s book, as well as their previous book, Audacious Ignatius. (Check out the episode here!).

Also in November, FaithND invited Paul to write a Gospel reflection at FaithND to discuss the book. In the reflection, he addresses the question that many have asked: Why a children’s book about Fr. Edward Sorin and the foundation of Notre Dame? (Check out the reflection here!).

Earlier in the year, the NDAA profiled Katie’s work of weaving faith and art in the creation of this and other books for children. (Check out the story here.).

We are honored and humbled to have such reception from the Notre Dame family!

Want to purchase Sorin Starts a School or Audacious Ignatius for your school or parish?  Click here to inquire about bulk discount rates.

Interested in the author and illustrator of Sorin Starts a School to visit your school or parish? Drop us a line!

The Notre Dame Alumni Association recently welcomed the author, Paul Mitchell, and illustrator, Katie Broussard, of Sorin Starts a School: The Foundation of Notre Dame on their podcast to talk about the favorite children’s book. Check out the episode on the FaithND site or on Soundcloud!

Dan Allen, the Associate Director for Spirituality and Service at the Notre Dame Alumni Association, interviewed Katie and Paul about their early lives of faith and how this shaped the children’s books that they now create together. (Katie and Paul are siblings, a first for the podcast!) Both Katie and Paul recalled fondly their education in Catholic schools as well as at Notre Dame. It was, in fact, in these schools that Katie (two years older) was Paul’s first writing tutor and that the they first encountered the charism of different religious orders that are now the central themes of the children’s books they create together.

Katie and Paul’s first children’s book, Audacious Ignatius, won a Moonbeam award in 2019, and foregrounds the charism of the Society of Jesus just as Sorin Starts a School does for the Congregation of Holy Cross.

Katie Broussard and Paul Mitchell also discuss how the touchstones of the spirituality of the Congregation of Holy Cross have guided and enlivened their faith. The Congregation’s motto is “Ave Crux, Spes Unica” (“The Cross, Our Only Hope) which is beautifully articulated in the final section of their Constitutions. Katie and Paul spent a good deal of time on the page in the book that resonates these themes, seen below.

We are deeply grateful and honored to have Sorin Starts a School on the Notre Dame Alumni Podcast.

Sorin Starts a School on the NDAA blog

Broussard, the illustrator of other children’s books including Audacious Ignatius, is a two-time graduate of Notre Dame, as a member of the class of 2004 and a graduate from the Alliance of Catholic Education in 2006.

“Notre Dame was where I really took ownership of my faith. I found my own spirituality there, and that really informs my desire to illustrate stories that can create conversations between parents and kids about their faith,” she says. “Kids have a ton of questions about God and religion, and I think it is fun to have a book with interesting illustrations as a jumping off point to get the conversation started.”

Additionally, the art as well as the text bring out the devotion to Our Lady of Sorrows, the special patroness of the order. The narrative and art of Sorin Starts a School weave the accompaniment of Our Lady with the many set backs Edward Sorin and companions faced as they build the University of Notre Dame.

We at Corde Press are overjoyed that the Alumni Association at Notre Dame profiled Sorin Starts a School on their blog this week.

I am pumped for this one.

Obviously, Katie and I are delighted to share Sorin Starts a School.  Honestly though, we may be more excited for the book to financially support the work of the CSC in Bangladesh.

The history of the Congregation in Bangladesh includes so many contributors, serious builders.  Below is a story including a few of them.  (And while I won’t belabor the point, you can clearly see all the elements, from this week’s emails, of the CSC charism here.)

After I left Uganda in 2009, I spent a few months in Bangladesh to be close to the woman that I would later marry while she was finishing up her post-grad service term.  Once there, I looked up Fr. Tom McDermott, CSC, who had helped run our volunteer orientation in 2007, and was now working in Dhaka, the capital.

And it was tough in 1851 when Blessed Basil Moreau agreed that the Congregation would take over the mission there. And it was tough in 1947 during the conflict with India and Pakistan following the partition of “British India.”  And tough in 1971 when Bangladesh fought for its independence.  Through all these seasons, the Holy Cross has accompanied displaced persons from conflict, marginalized indigenous people in the north, and scores of students through their excellent schools in Dhaka.

One Holy Cross missionary who dedicated his life to this accompaniment was Fr. Gene Homrich, CSC.  He was born in Michigan in 1928, started at ND in 1947, was ordained a CSC priest in 1955 and later headed to East Pakistan (now Bangladesh).  He worked there for sixty-one years helping to found two parishes with the indigenous tribes in the north, Jalchatra and Pirgacha.  (He passed away only this past summer, from COVID-related complications.  Here is a peek into the scope of his life’s contribution.)

And that summer in 2009, I found myself on the porch of the parish house in Pirgacha, after Fr. Tom invited me to tag along with him as he oriented the Bengal Bouts summer volunteers.

The sun was setting, Tom had just acquired both of us a quarter inch of Fr. Homrich’s scotch, and I settled in for a McDermott soliloquy.  (If you’ve spent half a day with Tom, you know what I am talking about and you know that it is awesome.)

He riffed on the extraordinary history of the church in Bangladesh (“It’s like… Micronesia in a sea of Islam!”), where the CSC fit into that history (appreciating the indigenous leadership), and the Christian vocation generally (“Just think about it!  A life of generosity is just more fun than a life of stuff!”).  He also took care to include me in it all and helped me process my two years in Uganda (“It sure was cute of the Lord to drop you by here for a few months on your way back home.”).

It was a perfect distillation of the joy he takes in his vocation, and his extraordinary ability to share this joy; that is, to include others in God’s call.

I encountered this joy again some weeks later during what was ostensibly a silent retreat at the CSC house in Dhaka.  Tom kept finding me to make sure I didn’t get too much quiet time.

Hey Paul – come over here – there is someone I want you to meet.

Hey Paul – come on into the common room after dinner – I told the Bengal Bouts guys you would talk to them.  Your topic is “The Truth Will Make You Strange.”

I have thought often about the topic he assigned to me that night.  (The line is a play, by Flanery O’Connor, on the verse in John 8: “You will know the truth, and the truth will make you free.”)

It is a grace, I think, to be both free and strange, and this grace runs deep in Tom McDermott.  Free to contribute your life to extraordinary work, and strange only to the eyes of the world who is caught up in other stuff and, honestly, not having as much fun.

His current project is, along with a formidable team, building Notre Dame University Bangladesh in Dhaka.  It is our joy to support these CSC builders in Bangladesh with all profits from Sorin Starts a School.  Let’s pray for the flourishing of their work, and for the grace to be made strange and free.

Order Sorin Starts a School: The Foundation of Notre Dame today! All profits support the work of the Holy Cross in Bangladesh.

Pumped about this project and have an idea of how we can collaborate?  We’d love to hear from you.

Today is about Fr. Edward Sorin, CSC.  Where to start.

Fr. Dick Stout, CSC used to say this thing about folks from the US who would travel to work in a new country.  Those who stayed for a year or less, he would say with a smile, often leave and write a definitive interpretation of what they encountered.  But those who stayed, and the longer they stayed, had a deepening sense of disorientation, wonder, and love that prevented such a reductive explanation.

I feel a bit like this about Fr. Sorin.

Katie and I read a bunch to prepare to write Sorin Starts a School, but the central text we drew from was this behemoth by former ND professor, Fr. Martin O’Connell.  Here, Fr. O’Connell exhaustively describes Sorin’s vocational journey, enigmatic character, considerable strengths, and inescapable shortcomings.

To me, Fr. Sorin seems almost uninterpretably complex, so, tough to write an honest picture book about.  But we sifted through his life and decided to leave readers of Sorin Starts a School with the following snapshot: Despite his shortcomings, his faith in God and his desire (and capacity) to build something that nourishes others was relentless.  Utterly and magnificently relentless.

And this theme of building stuff that nourishes is one that I find so important to our contemporary church.

Often, I wonder: “Will we be a people who comment or who contribute?”

Some time ago, I wrote out the following to challenge myself.

Think for a moment about how you spent the last year in the life of the church.

How much commentary did you offer?  That is, your opinion about what someone else was doing or creating?

How much creation did you offer?  That is, you showing up and offering generous leadership, an educational experience, a moment of beauty, a sacred space.

Fr. Edward Sorin, CSC was a serious contributor.  For years, it was unclear if Notre Dame was going to succeed.  Reading the history, it is a wonder that it did.  But Fr. Sorin and companions did the hard work of contribution, of building a place whose existence has been definitive in the course of our lives.

Unlike Sorin, though, we probably won’t build a university… or wait… why not?

But that is tomorrow’s post… regarding the work of the CSC in Bangladesh.

Order Sorin Starts a School: The Foundation of Notre Dame today! All proceeds support the work of the Holy Cross in Bangladesh.

Excited about this project and want to work together to share it? We’d love to hear from you.